﻿ Back from Maine | The Observer | Roz Rogoff | PleasantonWeekly.com |

I returned from my visit to Maine Wednesday afternoon. It took a day for me to get readjusted to the time change and California weather. I picked up my cats from Bishop Ranch yesterday. They are as happy to be home again as I am.

I visited my mother and brother in Maine for a week. Mother is in a Life Care facility in Scarborough, about 20 minutes from my brother's house in Portland. My brother Martin just retired after 40 years teaching law at the University of Maine. His oldest son, Ben, lives in Freeport. The middle son, Harry, lives in Wrentham, MA, and the youngest son, Seth, lives in Germany but visits with his wife and children a couple of times a year.

This year Seth and Jana were not there, but Linda, my Sister-in-Law, arranged a 75th birthday party for my brother while I was there. Ben came with his two sons. His wife, Sarah, had another event but came about an hour late. She is also the Representative from Freeport to the Maine State Assembly.

Harry's wife and two daughters came, but he was sick and couldn't make it. I was disappointed because I haven't seen him since his wedding, but their two little girls are adorable. 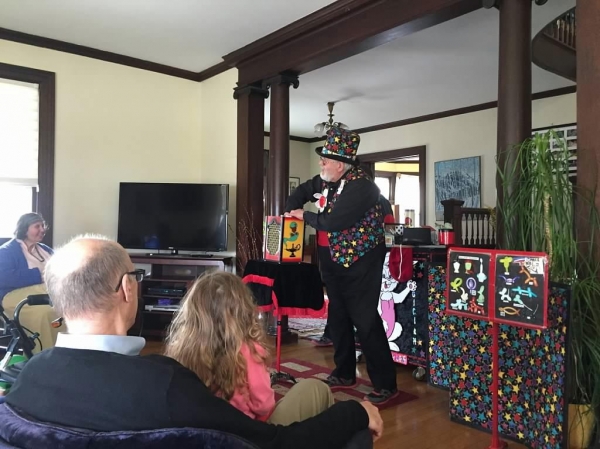 My sister-in-law hired a magician to entertain the kids. He was an older guy with a lot of corny old tricks, but the kids loved it.

The next day was Mother's Day. My mother's retirement home held a special Mother's Day lunch, which looked a lot like the regular Sunday buffet lunch but with more guests. My brother and his wife came too, so I got to see them again in a more subdued setting.

My brother was supposed to drive me back to the airport Tuesday night but he wasn't feeling good; so I took a taxi. I stayed overnight at the Hilton Garden Inn, which is right inside the airport grounds. The plane from Portland was leaving at 5:55 am, and I didn't want to miss it.

When I checked-in to the hotel I was told I was the "Guest of the Day," which included a drink and free breakfast, but I didn't want either. The Desk Clerk said I could take a couple of snacks for the plane. So I took a bag of potato chips and another of cheese crackers. I ate the chips and crackers for breakfast at JFK Airport between flights. The return flight from JFK was very smooth, and I was able to sleep most of the way.

Piper Shores is probably the best lifecare facility in the country. I looked at some lovely apartments there, but I don't want to move to Maine. I want to stay in my little house here until I can't anymore and then move to a facility in San Ramon or nearby. Many of the better places have long waiting lists; so I shall start looking soon.

I am delighted to hear that you have a family that you can visit and appreciate! Keep on truckin' HOORAY!


Thanks for sharing Roz. I really enjoyed this post. Dan


Hi Roz , Glad you're back from your trip safe and sound ! Before you sign away your life to one of those EXTREMELY expensive care facilities that really don't do much for their residents remember you can always have in-home private duty care. If you have Long Term Care insurance that will cover most of the cost. If you don't have LTC insurance if you do the math you still might be able to stay in the comfort of your own home when the time comes with some rather excellent care. Go with an agency that screens their employees and does the proper drug testing. You just might find yourself a full-time gem.


Thanks so much for sharing details about your trip! My husband and I will be flying to Maine on Friday, so that we can attend our daughter's graduation from Bowdoin College in Brunswick on Saturday. It's been a really great 4 years for her there, but she'll be flying back with us right away so she can start a new job in San Jose a few days later.


Great place to visit this time of year. But not in the middle of winter -20 and 15 feet of snow.


Bowdoin Parent, There are many good colleges in Maine. Bowdoin is one of the best. Congratulations to your daughter. I love the Brunswick area. There's a retirement community in nearby Topsham that I was interested in a few years ago, but I've decided to stay in California. Too bad Maine has such bad weather for half the year. Roz