I got a phone call on Wednesday from a man named Dave who wanted to buy a couple of domain names I registered 14 years ago. Back in early 2000 I was trying to start a training business, My Training Dept., which I still use.

I wanted to add Voice Recognition to my training videos, so I registered the names Govocal.com and Govocal.net. My idea was to develop maintenance or assembly instructions using voice commands on a laptop computer.

Thirty years ago I worked for a company called Xyzyx (pronounced Zyzex). Xyzyx published step-by-step instruction booklets for bicycle maintenance or plumbing repairs and similar documentation on contract for industry. I worked on operator manuals for nuclear waste disposal processing.

I wanted to add voice control to a combination of video, stop motion, highlighted stills and illustrations, so a voice command could be used to control the presentation. For example if you are in the middle of a process like adjusting your bike's brakes, you could stop the video, freeze a frame, or add a highlight using a voice command, while still continuing to work on the bike.

I didn't get very far with my original concept. I needed some technical help and support, but I couldn't find anyone who would help me. I spent most of my time trying to learn VoiceXML, which is a relatively easy programming language, but it was a distraction from designing instructional videos to use those voice commands.

I registered the domain names, Govocal.com and Govocal.net, with a plan to provide streaming video instructions under voice control. The man who called me wanted to buy these domains.

I know there are people who register domain names with the intention of selling them, but since I wasn't using those names I was willing to sign them over to the guy for free, but he insisted on paying for them. This was like found money.

He put the money in my PayPal account, and I transferred the registration of the two domains over to his GoDaddy Customer number. The whole thing took about ten minutes. I felt like I owed him more than just the names.

I had a GoVocal logo designed when I planned this business. It was designed by 1-800Logo, which is now called GoLogo. I went to the GoLogo website to see if I could retrieve my GoVocal logo, but I had trouble navigating the website.

I've always been very computer savvy but since turning 70 I'm much more easily confused. I'm not aging as well as my mother. She's sharper at 98 than I am at 72.

I left some messages on the GoLogo website about accessing my old logos. I received an email from Dave Tartamella, who I thought was the Customer Service representative. He said I needed to buy access to their File Storage program where my logos are stored. He assured me they are there, and even emailed me copies of two designs that were still in storage. He didn't know which of these was the one I used. I don't think I used either one, since I didn't keep GoVocal very long. 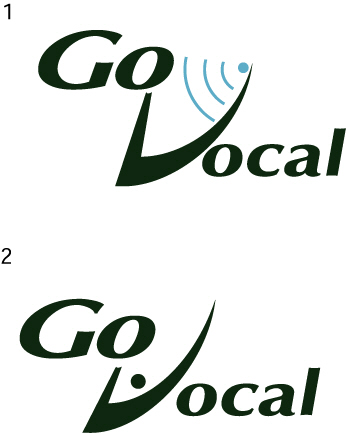 I left Dave a phone message about the domain name being sold and asked how the buyer could get access to my logos. He phoned back later that day, but when he said "This is Dave," I picked up the phone thinking it was the other Dave who is buying my GoVocal domains. So for the first five minutes of the conversation I probably didn't make any sense (so what else is new?).

We all hear how nice Canadians are. It's TRUE! GoLogo is located in Montreal and that Dave lives in Ontario. He's the owner of GoLogo and the main logo designer. He told me to have my domains' buyer call him and he would redesign the logo for the price I paid to access the stored logos.

He also remembered in great detail designing the logo for My Training Dept. 14 years ago. I really like my My Training Dept. logo. It was under $100. I don't do much training now, but I kept the business name and bank account and use them for billing these blogs.

So I emailed both Dave's and told them I would be writing this up in my blog tonight. I suggested they add any comments they want. This whole transaction is an unexpected windfall from a couple of very nice Daves.

How much were the domains sold for? Hopefully at least $x,xxx


You are a very nice person. GoVocal.com is a very nice domain and you had a sharp eye for naming when you registered that as a domain for the business you were planning. You got an amount of money which you are happy with and are happy to help the buyer start a business which is very noble of you. However based on reading many sales reports about published and verified domain sales I think the value of GoVocal.com is 2000-4000 dollars because it is a really nice domain and comparable domains sell for around 2000-4000 dollars per domain. I hope the buyer is thankful for the help you gave them in starting their business.


Jay, I'm not such a noble person but I am pretty nice most of the time. I'm fortunate that I don't need a lot of money to live on. I bought my house in San Ramon in 1998 before the crazy inflation in housing prices. It's on a reverse mortgage now, so I have very little in living expenses. I worked for 35 years in good paying jobs so my Social Security amount is higher than the median. I supplement it by writing these blogs and teaching online for University of Phoenix, which also keeps me from vegetating in my old age. I'm really happy someone wants to take over GoVocal. I like to see my ideas put to use. I might even be able to do some work with this guy. He seems very nice, and if I got more money I'd probably just waste it. I have a tendency to be an impulsive-compulsive buyer (as well as eater, but that's a different problem). I didn't know the going price for domain names is in the $2000-4000 range now. I thought his offer might be low, but I still consider it found money. So I'm happy to accept it. Roz


Jay & Tim, You were right. I let those domain names go too cheap. Oh well. Maybe I am too nice. Time to toughen up. Roz