Uploaded: Nov 22, 2014
A few weeks ago I wrote about receiving calendars from organizations asking for donations. I didn't donate then, but I will contribute now.

I try to be selective where I send my money. One organization that has been around for a long time is The March of Dimes. The March of Dimes was started by President Franklin Roosevelt in 1938 to find a cure for Polio. Most people did not have a lot of money in those days, so the organization started by collecting dimes. Maybe that's why Roosevelt's picture is on the dime.

You may know that President Roosevelt was stricken with Polio as an adult, but children were the most susceptible to the disease when I was growing up. A boy in my class in elementary school contracted polio during one of the epidemics in the early 1950's. He survived but required braces on his legs for the rest of the school year. He took up ice skating to strengthen his legs and became a Junior Champion by the sixth grade.

The March of Dimes was successful in sponsoring research that resulted in the Polio vaccine. So it changed its focus to preventing birth defects and premature births. Since infants born prematurely often suffer from harmful conditions for the rest of their lives, preventing premature births makes the population as a whole healthier in the long run. This is preventative medicine at its best.

As a senior over 70, I'm very fortunate to be able to live in a nice house in comfortable surroundings and with plenty of food to eat, actually way too much. So I donate some of it to organizations that help seniors and families who cannot afford enough to eat.

I plan to bring some of the canned food I bought on impulse back to the Nob Hill Market next week to put into the donation boxes for the holidays. They also have donation cards of $1, $5, and $10 at the checkout counter, which I occasionally toss into my cart along with my groceries.

I also donate money and food to local food banks, like the Contra Costa and Solano Food Bank, and other organizations that give away food or provide Thanksgiving or Christmas dinners for poor or homeless people.

The Tri-Valley Community Outreach Dinner will be offered at St. Raymond's Church in Dublin from noon to 4 pm on November 27th. This traditional Thanksgiving Dinner is provided by a "coalition of businesses, churches and community organizations," including The Pleasanton Weekly. 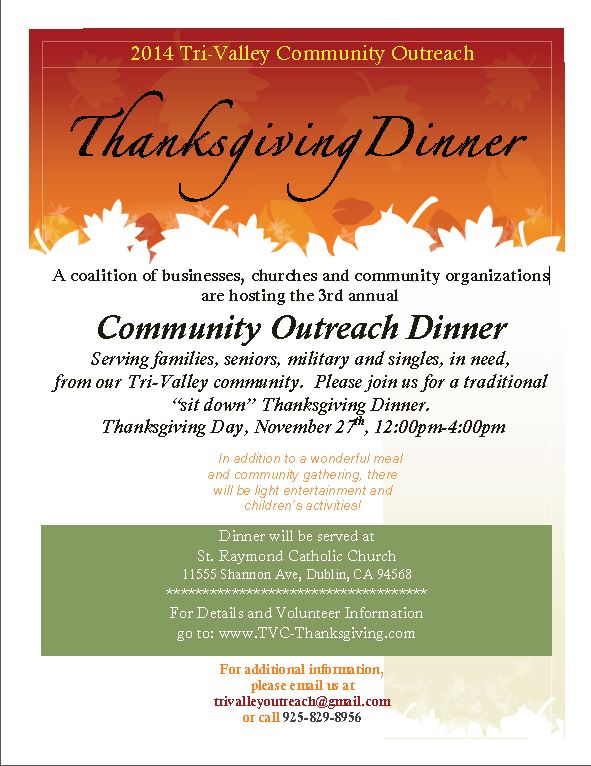 I also support organizations that rescue and care for animals, like Safe Cat Foundation in San Ramon, the East Bay SPCA in Dublin, and Muttville in San Francisco.

One of the best animal protection organizations in the USA is the Humane Society of the United States (HSUS). HSUS passes laws protecting animals from exploitation and abuse.

HSUS is so effective in breaking up puppy mills and passing laws protecting farm animals that the food industry and puppy mill organizations sponsored a counter organization, Humane Watch, to discredit the HSUS. Do not believe anything your read from Humane Watch. This is a vile organization funded by businesses that profit by abusing animals.

The HSUS recently held a Virtual Town Hall Meeting on the Internet to inform supporters of what they are doing to help animals in the US and around the world. Click on the link here to find out more and to hear their success stories from CEO Wayne Pacelle.

Report Objectionable Content
+   1 person likes this
Posted by good information, a resident of Pleasanton Heights,
on Nov 26, 2014 at 11:29 am


Thanks for posting some info on good charities. Before anyone donates money it is important to research the charity. The primary thing that I look for is the salaries paid as a percentage of gross revenues. And how much money taken in actually goes out to benefit the animals/people/whatever.

There are online sources for much of this but several numbers that I remember are the million dollar plus salaries of United Way execs and the fact that less than 4 cents of every donated dollar goes back out to benefit the causes of Unicef. No money should ever be donated to any so-called charitable organization that is paying salaries and benefits in the millions of dollars of the donated money. There are plenty out there that do not hire telemarketing firms to solicit, send copious amounts of junk mail and spend too much on salaries.

In addition to those mentioned in this post, the Salvation Army pays NO salaries and puts all donations to work, Farm Sanctuary has the highest percentage of pass through of donations of any animal organization that I have researched. Donate your money wisely and it will do so much more good.


Thanks for the comment. I agree it is really important to check out the charity. My mother uses Charity Navigator (www.charitynavigator.org). They rank a lot of well known charities, but not all of them.

I donate regularly to Sentinels of Freedom, which was founded locally by Mike Conklin about 10 years ago. I was at the San Ramon City Council meeting when he brought up the idea of supporting wounded soldiers returning from Iraq. He has spread this organization nationwide now, but it still isn't covered by Charity Navigator.

I received information that Charity Navigator is expanding to add more charities to their database. By next year more should be listed. They break each charity down financially into Program, Administration, and Fundraising. Often the amounts going to Fundraising are more than Administration and even Programs (the actual purpose of the charity).

Ratings are from one star to four stars. I usually donate to three and four star charities, but I sometimes donate to a two star charity if most of the money goes to program expense. There are other criteria that can lower the ratings that are not as important to me.


Thank you for the nice comment, Sameer. Beware of paper writing services. The point of writing your own papers is to improve your own writing. If you want to become a good writer, read what others write but develop your own style.