﻿ I'm back at blogging | The Observer | Roz Rogoff | PleasantonWeekly.com |

I'm back at blogging

I didn't post a blog last week. I posted so much before the election that I thought I posted some last week but no, I took last week off.

Actually I was working at my other job, teaching online for University of Phoenix. I taught two three-day workshops starting on Wednesday and finishing up Friday at midnight.

On Tuesday night I spilled a bottle of iodine on my keyboard and I couldn't type on the first two rows of letter. I really needed more than the bottom row. There aren't even any vowels down there.

Wednesday morning I rushed over to Target and bought a $10 keyboard, which I'm using now. It isn't very good, but at least I can use all the letters; so I was able to teach my workshops and write this belated blog.

I'm glad the election is over and the emails demanding money or something dire would happen have stopped. The local results were not surprising. I'm glad Catharine Baker won, but Tim Sbranti didn't have much chance considering the anti-union sentiment here after the BART strike.

I looked at the blogs I wrote on both candidates. The last-minute mailer against Sbranti was a serious attack and after researching the accusations, it turned out to be mostly true.

The attack on Baker in retrospect is laughable. The worst thing Sbranti's supporters could say against Baker was she opposed Proposition 2. She didn't and I proved that, but So What! So what if she opposed Prop. 2. A lot of people did. 1.7M Californians voted against it.

Actually Baker's comments about the cap on School District savings caused me to take a second look at the details behind Proposition 2. As often happens with euphemistic names and descriptions there's a lot more going on when you look behind the curtain.

The money saved in Prop. 2's Rainy Day Fund will be used to pay off existing state debts, but the amounts saved by school districts could be capped. Baker called it "loss of local control," and "micro managing," and she is right.

The law that establishes the fund was passed by the State Assembly with bipartisan support, so it is pretty tightly structured and defined. It isn't simply putting pocket change in a jar to use later for milk money.

Proposition 2 passed by a landslide. Despite 1,767,806 No votes, the Prop passed with almost 4M YES. Proposition 1, the Water Bill, passed by almost the same 2-1 split. The other Measures on the ballot didn't do nearly as well.

The mega money spent by Insurance companies to kill Propositions 45 and 46 paid off big time for them. I see bonuses to the executives, while regular people like Bob Pack and April Rovero continue their fight to protect people from losing loved ones, like they did, to prescription drugs and medical malpractice. 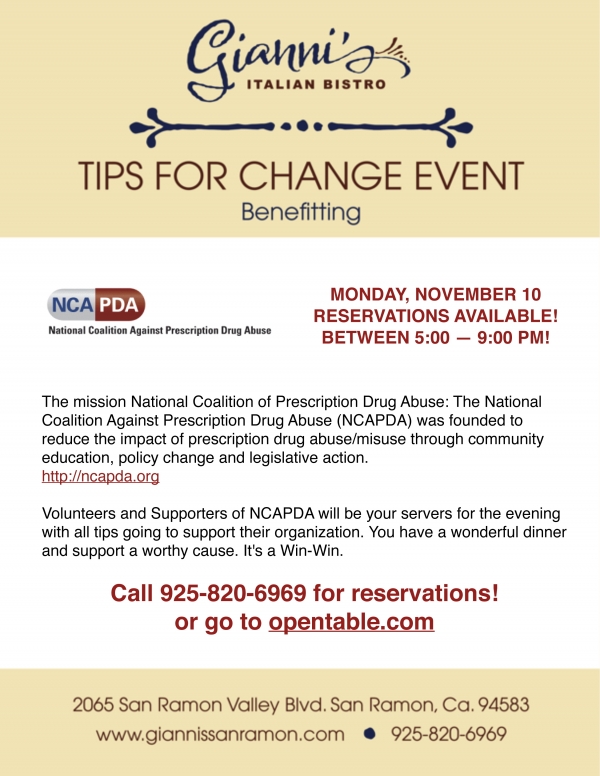 April's organization, the National Coalition Against Prescription Drug Abuse is hosting a fundraiser this Monday night, November 10th, at Gianni's Restaurant in San Ramon. I booked my reservation for 6:30 pm. I hope they get a big turnout for this event. It has two things I'm especially fond of, Good Food and Good Deeds.

Roz- you are very famous in our little valley! Where can fan mail be sent???


Thank you so much, Fan. You can mail gifts and cards with money to:

You can skip the money and gifts.

Report Objectionable Content
+   2 people like this
Posted by Jennifer Bestor, a resident of another community,
on Nov 9, 2014 at 8:22 am


Roz, thanks for taking a look behind the Proposition 2 curtain. The school cap is abhorrent. You say that Prop 2 doesn't simply put pocket change in a jar -- well, it saves about $1 billion a year, with $4.6 billion expected four years from now.

But the school fund cap would force 19 out of 20 (94%) California districts to spend down their reserves -- in fact, to spend down $5.4 billion!

This past downturn, the State forced schools to loan it over $10 billion. Next time around, they'll have only $2.4 billion to "loan" -- after that, they will have to take on expensive debt or voters will have to increase taxes.

It will be interesting to see whether Prop 2 helps or decimates our schools.

Thank you for the additional details on Prop. 2. I read the summary in the Voter Information booklet, but I can't find where I put it now.

I don't know if the school funding portion of the Proposition can be changed without another vote, but that might be a reason to put a measure on the ballot next year to fix it. I doubt the State Assembly would do it, so it might have to be a grassroots measure.


Hi Roz
Thanks so much for supporting the NCAPDA fundraising
event at Gianni's Restaurant tomorrow night.
It's a great organization and I along with other
volunteers will be serving. All the tips
will go to NCAPDA.
It's going to be a fun night!!!

I received a notice from LinkedIn that you celebrated your 27th year as a Contra Costa County DA. Congratulations. I'll see you tomorrow night. Sally is driving. You met her at the chocolate party at your house last year.


Jennifer, Roz: The RC tried to draw out the school board candidates in both districts to comment on that Prop 2 cap in a late Sept blog Web Link . I even sent a link to each of them -- not a peep back to me or the blog's Comments, although one commenter (Glates) said the 5% cap is much less than SRVUSD usually socks away.

It was a big part of the discussion on Prop 2 on KQED's Forum.


Roz, you still got it! Keep up the good work.

You did a very thorough job of explaining the pros and cons of Proposition 2. I agreed with Herman Glates that the Legislature should have put it into the budget and not on the ballot.

It passed the Legislature 100%, so they could have done that even if they lost a few votes, thereby allowing themselves to make future changes. Or did Brown want to lock the design down so it could not be easy to modify?

Also why would the teachers' union want to cap the amount school districts could save at 5%? You said it was because that would be used for raises, but there's no amount in the proposition specifically targeted for teachers. That 5% could be used to upgrade facilities, buy athletic equipment, or new computers. That could mean that teachers wouldn't get any part of it at all in some years. Maybe they should wise up and put another measure on to take the cap off.


Zero Up also allowed me to customize few settings as per my choice and once I was done with it, this software handled everything else. On the same day, I started my business online and I was quite excited about it. After all, now I was working for my store, my business and I was managing as per my choice zero up 2.0 Robert kiyosaki Web Link
....