﻿ My secret identity is revealed! | The Observer | Roz Rogoff | PleasantonWeekly.com |

My secret identity is revealed!

I received the following email via LinkedIn on October 5th.

I sent you a LinkedIn request because I'm looking for the composer of the song "Nobody Loves the Hulk," which was advertised in comic books around 1970. The composer credit says "R.L. Rogoff," and I found a website that gave the composer's full name as Rosalind Rogoff. You're the only Rosalind L. Rogoff in the country, so if you know about this song, I'd love to interview you for my music blog. If you don't know anything about it, then I'm sorry for bothering you! 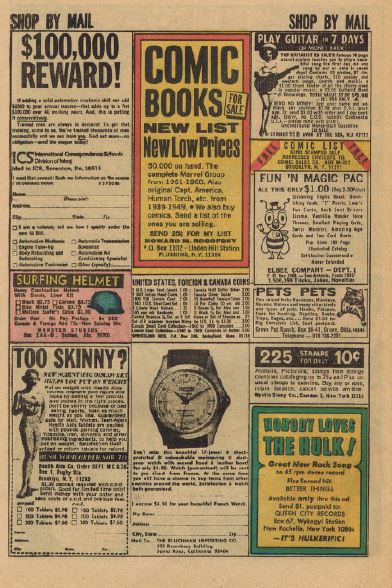 Yes, I confess. I am the Rosalind L. Rogoff (the one and only apparently), who wrote and produced the record "Nobody Loves the Hulk" in 1969. But this isn't exactly something I wanted to go down in history for. It seems the old Hulk song has become a cult classic. According to Adams, who ironically is a fellow Technical Writer (we must have latent comic book genes), "Believe it or not, people are interested in this song!"

In fact he informed me that it was rerecorded by a Swedish band called, The Maggots, in 2006. My original version was recorded by The Traits, in New Rochelle in 1969. Both of these versions can be heard on Youtube.

I didn't know that my campy 1969 record had a life past 1969. I gave up reading Marvel comics when I started Graduate School at UCLA in 1972. I still have a box of Marvel Comics from the late '60s that my father sent me when I moved from New Rochelle to Los Angeles to attend UCLA.

I got hooked on Marvel Comics in 1963 when I was an apprentice at the Westport Country Playhouse and a kid from the neighborhood showed off a new comic in which the super heroes acted more like regular people. It was one of the early Fantastic Four comics. So I went out and bought a copy of it. I had all of the early Marvel comics, but my mother kept nagging me to get rid of them.

I was trying to break into the music business and wrote a few songs in the late 1960s. I couldn't get any of them published so I tried starting my own record company to produce my own songs. I planned to sell the records mail order, so I wrote songs I thought would appeal to fans of Marvel Comics.

In 1969 or 1970 I wrote a letter to Stan Lee asking to be elevated to the rank of FFF. That sounds almost dirty but FFF stood for Fearless Front Facer, which was the highest rank in the in the Mighty Marvel Marching Society.

Stan answered my letter on the letters page of one of the comics and officially named me a Fearless Front Facer, "An honorary title bestowed for devotion to Marvel above and beyond the call of duty." I couldn't find the issue with my letter or Stan's answer, so you just have to trust me on this one.

So now you know, I was a nerd at the level of the guys in The Big Bang Theory. In fact now that my secret identity has been revealed, I'd be willing to do a guest shot on The Big Bang Theory and even write my own dialog, but I doubt the producers read my blog or Greg's. If any of you want to read Greg Adam's interview of me on musicweird.com click on the link I just posted.

Did you compose the lyrical melody, as well? If so, you may have a hulking big infringement claim -- it sounds like every other, later punk song I've ever heard, Lady RozRo (you head-banger you).

I wrote the music and the lyrics, but the guys in the band made the arrangement and improved it to the cult favorite it is today.

I must say I am becoming more addicted with each listen of the song "Nobody Loves The Hulk" which you put together way back when. The Hulk has always been my absolute favorite Marvel character (or any comic book character for that matter), and I'm grateful that you assembled this gem of a song. Raw, unbridled garage rock. Peculiar in a way, because that’s probably not even close to the way you originally envisioned it given your personal musical interests.

Perhaps the real charm of “Nobody Loves The Hulk” is the fact that it is indeed a bonafied novelty classic now.

There is one part in the song that gives me chills every time I hear it. The lines "The Hulk is a monster who's ugly, oversized and green... his strength is fantastic and his disposition's mighty mean..." This is musically the best part of the song and the way the vocalist sings it is nothing short of perfection! It really makes you feel pity for the Hulk's character. The anger he feels is easily understood in the fact that he is different than the world around him and doesn't quite fit in.

The only critique here is maybe you should have used the word "incredible" here instead of "fantastic". But a three syllable word does seem to more harmoniously fit the musical structure ;)

Also, were there many female comic nerds at that time? (1960's-1970's) Today you have women of all ages dressing up for cosplay at comic conventions and attending Marvel movies. But I'm just curious how common (or uncommon) it was for females to be interested in what was (once upon a time) considered more of a male oriented market.

Thank you for taking the time to read this Roz and thanks for writing a great song in homage to my favorite character.

The future of homework
By Monith Ilavarasan | 0 comments | 1,016 views