I attended Assembly Woman Joan Buchanan's presentation on California's Water Woes Wednesday night. The presentation was held upstairs at the San Ramon Library. The turnout wasn't as big as I expected.

There were about 50-100 people, mostly in that same age range. There was more gray hair than a clowder (I looked it up) of silver tabby cats. I don't know why younger people aren't more interested in our water woes. They will suffer more long-term from it than us old folks.

Most of the presentation focused on water rights and water allocation and not what individuals can do to save water. As you can see in the chart below, state water is overallocated by as much as 8x the amount available. 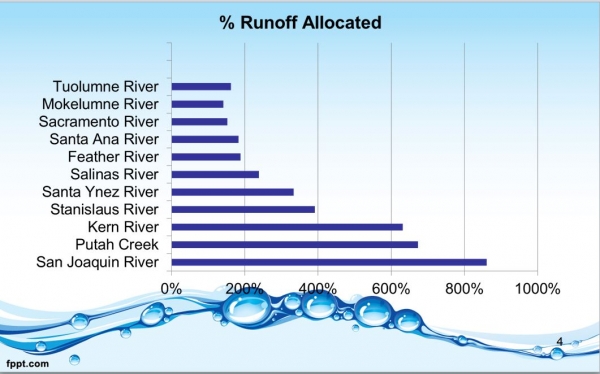 Rene Wilber emailed me last week about a leaking hose at California High School that nobody in the athletic department took very seriously. The guys she spoke to just brushed her off . Rene told me, "I think if I were a man he would have just responded with 'Yeah dude, we need to get a new hose.'"

Some of my readers might remember that Rene was the person I accused of distributing anti-Walmart flyers under the name "Ganz Frank." The name was just a play on words, with the German word Ganz meaning totally and Frank meaning frank.

Well I finally apologised to Renae. I wanted to "expose" the mysterious Frank Ganz, but I can see now that it wasn't Renae. I gave Renae my lawn mower and edger last year, which she "took as a truce."

So what does all this digression about Renae Wilber have to do with Water Woes? Hold on I'm almost there. I brought up Rene's experience during the Q & A session of the Water Woes meeting.

Assembly Woman Buchanan went on about how so much water is wasted by big Agriculture, which gets 80% of the water but is only 2% of the state's GDP (I was surprised it is that low), Cal High's leaky hose seems small in comparison.

So I asked how much good it does to cut wasting water like that when so much is being wasted across the State. Buchanan said "It's both," but added "Home conservation alone isn't enough."

Buchanan is for increasing recycling, which the Dublin San Ramon Services District has been doing for the last ten years. I thought I saw Ed Duarte, one of DSRSD's Directors, on the other side of the room, but he left before the Q&A session.

Buchanan believes desalination of seawater is necessary and the new Water Bond (Proposition 1) will fund a desal plant in San Diego.

I spoke to Buchanan after the meeting to ask about home rain water capture and noticed a small bottle of Arrowhead Water on the podium. "Why do we allow them to steal our water and sell it back to us?"

"Water rights," she answered. Bert Michalczyk, Head of DSRSD, also mentioned that at another meeting. Water is a commodity, but it should be a necessity.

When rain falls on my property, I consider that rain mine. I own it and store it in tanks on my property. I'd be willing to give up my rights to the water that falls on my house and yard, and empty my water barrels, if so-called "water rights" were abolished throughout California.

Nobody should own the State's water rights. A leaky hose at Cal High can be fixed. In fact Rene later wrote back that she called the Superintendent of Schools, and the leaky hose was replaced right away. But a mega-corporation like Nestle, bottling our groundwater during a drought to sell it back to us for profit, is just plain wrong.


I wander what it costs Nestle to treat and produce their ground water per acre foot?

It costs the city of Pleasanton $155.00 per acre foot to pump the ground water. They than mix it with Zone 7 water prior to sending to users.

Zone 7 charges Pleasanton $970.00 per acre foot. I do not know what it costs Zone 7 to produce. It is not clear to me how much ground water zone 7 uses, if any.

Pleasanton has a cap of 3500 acre feet per year. Can access more in an emergency.
I wander if Nestle has a cap and limited to how much ground water they can use?

I believe desalination is the only way to go. I posted a couple of blogs on desalination. East Bay city leaders are not interested in discussing desalination.


Excellent article Roz....I hope people are listening. I can only imagine if all the leaky hose problems were fixed on a local level, that the "little" waste could turn into big waste, and what a great opportunity for all of us to realize that we are empowered to make a difference!

That's a good question. I don't know the answer, but Target sells those little 8 oz bottles in 12 packs for around $2. So that's about .17 each. I'm willing to bet the packaging costs Nestle more than the water.

Zone 7 gets its water from the Delta. It's safe to drink, but has some taste and odor issues, which is why Pleasanton mixes it with ground water. In 2004 when I first ran for DSRSD, they were proposing to inject the recycled "wastewater" (translation, sewage) into the ground water. Pleasanton held a non-binding referendum to keep the recycled water out, which won by a landslide.

Ironically the recycled water is purer than the Delta water, but during the DSRSD debates, I called it "The yuck factor." I'm pretty sure I coined that phrase, but it has been used by other candidates and Directors of DSRSD now.

Small amounts of wasted water does add up. So that is a good reason to conserve and fix broken hoses or pipes.

The scary thing about Buchanan's presentation is the over-allocation of water. Five to ten times more water is allocated to various sectors than the state has! That's the real issue in the drought. It's like promising five kids $1 each allowance, but only have $1 total to split up.


Hi Roz...First kudos to the young adults who are assisting the local customers when they fill up containers or tanks with DSRSD recycled water. They seem to be very excited about helping the community through this drought and they are very knowledgeable about the technical aspects of reclaiming water. So, at least some younger adults do care about the drought. Thanks to DSRSD for even making this possible. It really helps.
Just a pause for thought on Proposition 1. Between 1996 and 2006 the state spent 7 billion dollars on the California Water Project (CWP). How much water did the CWP deliver to anybody in California this year....0%. What will 11 billion dollars do that 7 billion couldn't? The answer to your storage question is that all the prime locations for water storage are already used. This was the thrust of the dam building boom between the 1920s to the 1970s. Governor Edmund Brown (Jerry's father) stated, because of the CWP, that now there will be enough water for generations of Californians to come.
I agree that water is wasted. However when it comes to agriculture, it may only be 2% of California's GDP, but you kinda need food to survive. Not so with social media, which is becoming a hacker?s paradise. Interestingly you are 5 times more likely to have your personal identity stolen when using social media applications. How much water could we save if we got rid of all the social media companies?


The information that Assemblymember Joan Buchanan provided was wonderful. But it made one wonder why build huge reservoirs when there is not enough water. I agree that we need desalination plants and they will be profitable to build in about three years thanks to the technology developed by the Lawrence Livermore Labs.

But I need to state one important correction to your information. Prop. 1, the Water Bond, does NOT delegate funds towards building desalination plants (unfortunately).

BTW, it is the water agencies that gain the water flowing south, store it, and then sell it for a profit. Our water! They sell it to Agricultural businesses. When the last water bond passed, it designated certain percentages that residents and businesses must decrease in water consumption and increase in recycling. The % agriculture had to recycle: 0. Yes, we need food, but they are using water to grow rice and cotton, very water intensive crops.

I posted a link to the text of the Water Bill in another blog. You are correct. There isn't funding for a desalination plant. I took notes when Buchanan brought it up. She made it sound like there was funding. She has one bullet in her presentation for "Regional water security, climate & drought preparedness $810M."

Her presentation jumped around to different water issues which are not all helped by the Water Bond. Someone at the presentation asked about high-water use crops like cotton. Buchanan said the wine growers are doing a good job managing their water use, but California isn't the best place to grow cotton.

Buchanan had a slide in her presentation showing the low levels of state reservoirs. Except for Pyramid Lake, most are between 11% to 35% capacity.


Los Vaqueros built by CCMUD in 1998, and later expanded -- technically not 'the state' but how many other reservoirs have been built IN CA since 1973?


Lake Shasta by far is the largest reservoir at 4 million acre feet. Now for the 800 pound gorilla in the room?. Lake Tahoe holds 122 million acre feet. All the reservoirs in California don?t even hold one tenth of the water contained in Lake Tahoe. Did Joan Buchanan mention this in a "what if" scenario?