October is Fair Trade Month. Fair trade is a practice where suppliers and producers of products, components, or ingredients, are paid fairly for their efforts and goods.

Fair Trade enables these producers in other countries to move out of poverty and improve their lives, and those of their families and children, and countrymen. It is, as it says, being fair to the people who supply the materials and ingredients we use here in our manufacturing, food service, and daily lives.

I thought "Fair Trade" was a generic term to describe how farmers, tradesmen, and crafters, were paid for their products. Doing research for this blog, I discovered that Fair Trade USA is a non-profit organization in Oakland that "audits and certifies transactions between U.S. companies and their international suppliers to guarantee that the farmers and workers producing Fair Trade Certified goods are paid fair prices and wages, work in safe conditions, protect the environment and receive community development funds to empower and uplift their communities."

So Fair Trade USA is a go-between corporations, suppliers, and laborers, to make sure buyers receive quality products and producers receive fair prices. Most Americans believe in being fair to other people by respecting hard work and rewarding quality work. That's what Fair Trade is about.

Last March I wrote my blog on Coffee. I was trying different varieties of coffee. Coffee is one of those products that is grown in what are often called "Third World Countries." These are countries in Africa, South America, Asia, and the Caribbean, where growers and workers were not paid enough for their beans to make a decent living. Fair Trade USA now represents many coffee growers in these countries.

After I wrote my blog on coffee, someone suggested I try Café Kreyol. I don't remember who suggested it and I can't find an email or reply to my blog with it, but I checked out the Café Kreyol website.

Café Kreyol is in Haiti and is not Fair Trade. According to the Café Kreyol website it is Direct Trade. "This Direct Trade system, which is the backbone of Cafe Kreyól, believes that quality and sustainability go hand in hand and that farmers should get paid based on the quality of their product. We practice that belief by paying up to 300% higher wages than what Fair Trade requires for truly exceptional coffee." 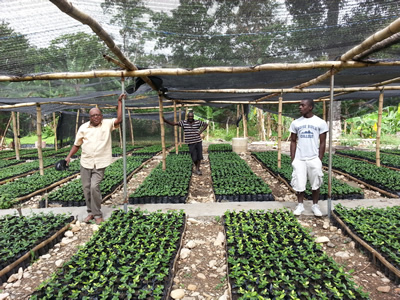 I bought two varieties of coffee from Café Kreyol last month ? Zombie Desert (Great coffee, terrible name) and Caribbean Blue. The "Blue" coffee bean is the same bean variety grown in Jamaica as Jamaica Blue Mountain, which is among the most expensive coffees in the World. I have tried Jamaica Blue Mountain and it is great, but costs about $40 a pound. Haitian Blue is $15 for a 12 oz. bag or half the cost of the same coffee variety from a neighboring island.

I also bought a coffee tree for $1.85 which basically finances the purchase, planting, and nurturing of a Blue Mountain Coffee tree to replace trees lost to leaf rust. My only stake in Café Kreyol is that I like the coffee and now own a tree. 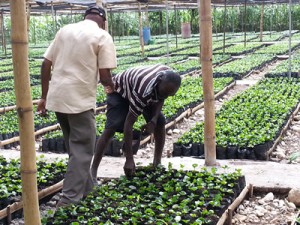 I visited Haiti many years ago on a cruise. I remember that despite the poverty of the country the people were very proud and dressed up when the cruise ships were in port. I probably will not go back to Haiti again, but I can remember my visit by drinking what has now become my favorite coffee.