On Tuesday Eliana Caimanque took Lulu to the Sage Center for Veterinary Specialty in Dublin for the surgery to repair her ruptured disc. She spent Wednesday recuperating at the Sage Center.

Eli posted the following comment on Facebook. "Animals are amazing!!! Lulu was able to stand up yesterday 3 hrs. after her surgery!!!! Today she passed her neurological examination with flying colors! She is eating and urinating normally. They are going to let me visit tonite. I am soooo happy that she is doing so well. She is a real trooper and a surviver!!! Finally her story is going to have a happy ending,!,,,We love Lulu!!!" Woohooooo!!!"

Eli called me a this evening to tell me that Lulu is doing well but must be kept immobile for the next three to four weeks while she mends.

Lulu tried to scratch her incision with her hind legs, so Eli bought little booties to put on her back feet so Lulu couldn't scratch the incision on her chest.

You can see the long incision on Lulu's chest in the photo. The ruptured disc was in her neck. Lulu's sutures will be taken out in three weeks.

Eli captioned the photo, "Here is our model Lulu with the latest fashion in boots from the designer 'Looking Good'." 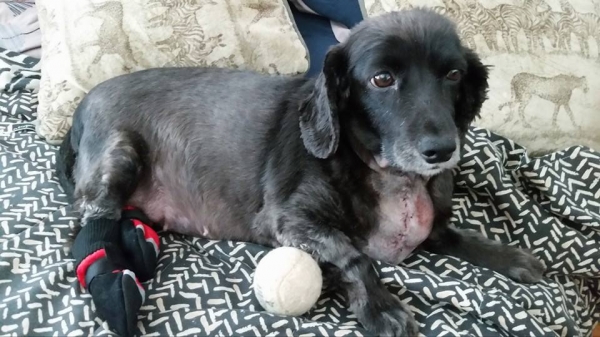 Lulu doesn't understand why she can't scratch her incision or move around the house the way she used to. Lulu has been kept in a cage in Eli's bedroom. Eli put Lulu on the bed for the photos but kept an eye on her so she wouldn't jump off.

Lulu is on a diuretic, so Eli had to carry her downstairs and outside to pee and back upstairs again. Lulu weighs 17 lbs., which is a lot to carry up and down stairs. Eli moved Lulu into a guest room with a sliding glass door so she can take Lulu in and out easily.

I was hoping we could have a party for Lulu at the Delmar Dog Park and invite all of the supporters who helped pay for Lulu's surgery. That will have to wait about a month until Lulu fully recovers.

Eli wants to thank all of the people who contributed to Lulu's surgery. She will be sending thank you notes to everyone whose addresses she has.

At least this is a positive story with a happy ending. Let's hope there are many more happy endings for Eliana and Lulu from now on.

Yay for Eliana and Lulu! Now, we need another cause to contribute to.... Perhaps: Web Link


If Missy Lulu doesn't have the CUTEST baby face in the world I don't know who does! Not to mention a cute nosey nosey nose! HOORAY!


Always heartening to hear? -Of an animal or human life saved through modern medicine since we all know, it is always "iffy" and can go "the other way". Lovely to hear of Lulu's recovery...Glad to be a part of it.


Thanks for your support, Ms. Bunny, and everyone else who contributed to help this little dog. So many animals have such a bad life, and Lulu's life wasn't so great until now. Now she will be healthy and happy and loved and not left on the streets of a big city (Santiago, Chile) to forage for food.


This is great news!!! I'm so happy for Lulu and Eliana.

I received an email from a friend that her check to Eliana for the surgery has not been cashed yet. I called Eli and she told me she saved some of the checks for follow up visits that are not included in the price for the surgery. She will be cashing them as needed and appreciates all the support from everyone who contributed.


So glad the surgery was a success Eli. Lulu looks to have put on a bit of weight! Perhaps a
diet will help her get her waist line back!


So glad the surgery was a success Eli. Lulu looks to have put on a bit of weight! Perhaps a
diet will help her get her waist line back!