What ever happened to buttermilk? I mean the liquid left over after churning cream into butter. There is something in the supermarkets called "Buttermilk," but it is what my Grandmother used to call "Sour Milk." In other words the stuff they sell as "Cultured Buttermilk," is simply deliberately spoiled milk to make it sour.

Sour milk, which can also be made at home by adding lemon juice or vinegar to regular or non-fat milk, can be used instead of buttermilk to lighten pancakes and biscuits, but it still isn't Buttermilk. Even the dry Buttermilk powder sold in the stores is "Cultured," and not the run-off from making butter.

In the first place this phony Buttermilk often has some percent of fat in it. I've seen 2% Reduced Fat "Buttermilk," and even Low Fat 1% "Buttermilk." Real Buttermilk has no fat in it because all of the fat from the heavy cream is in the butter!

My mother used to drink Buttermilk in place of Skim Milk because both had 0% fat. I can even remember vendors on the Boardwalk in Atlantic City, NJ, selling dippers of Buttermilk when we took our annual summer vacation there.

Pop liked Atlantic City and it wasn't too far a drive from New Rochelle, NY. There were a lot of activities for kids and grownups. I'm not sure if it has come back to its former glory after being pummeled by Hurricane Sandy two years ago, but it was a very popular vacation spot for families in the 1950's.

Back then we had a Milkman and a Bread Man who delivered fresh milk or bread to our house in New Rochelle every morning. Mother would order a bottle of Buttermilk at least once a week. My Grandmother who lived with us would use it for cooking or if we were out of it, she would use any of the leftover spoiled milk. Now the supermarkets, even Whole Foods, are selling intentionally (cultured) "spoiled milk," as "Buttermilk."

So where is all the real Buttermilk going? After all dairy companies are still making butter. Does Land O'Lakes have tanks full of Buttermilk stored somewhere? Why don't they bottle their Buttermilk so choosy consumers can buy the real stuff?

I did make my own Buttermilk just to see how it would turn out. There are some recipes or instructions online, but don't use the ones that tell you to add lemon juice or vinegar to low fat milk. Those are bogus. The proper way to make real Buttermilk is to churn your own butter.

There is an old-fashioned butter churn at Forest Home Farms which is used as a prop in the educational programs for Elementary School children. These are field trips for third graders to learn what life was like in those ancient times from 1930 to 1960. 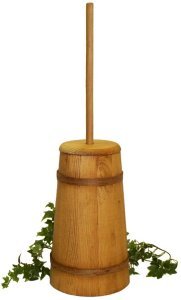 I volunteered in 2008 to give demonstrations on how to can fruit jams and jellies. Other volunteers demonstrated darning socks and churning butter and other typical farm activities before the days of Supermarkets.

I did not use a butter churn like the one in the photo above to churn my butter. I used a blender. The Waring Blender Company was started by Band & Chorus Leader Fred Waring in 1938.

A story I read somewhere, which isn't in the Wikipedia article linked above, was that Waring liquified his meals when he was on the road with his band because it saved time to drink it. In any case he was responsible for commercializing the first electric blendor (original spelling according to Wikipedia).

I used a Hamilton Beach Blender. I poured a pint of whipping cream and blended it on high until it turned into a lump of white butter (no annatto added for color) and thin white liquid buttermilk! I squeezed more liquid from the soft blob of butter, and wound up with about 1 C of butter and ½ C of Buttermilk. The butter was soft, but pretty good. I might have been able to squeeze more buttermilk out of it, but I didn't have any cheese cloth to squeeze it through.

I used my homemade Buttermilk to make pancakes. It was just enough for one small batch. If anyone knows where to find Real Buttermilk and not the artificially sour stuff, post it in a comment to my blog. I have not tried the Farmer's Markets yet, so maybe someone there has the genuine article!

BUTTER BUTTER BUTTER! Juicy Cholo secret: I like rubbing butter on my face and feet, it does a beautiful job of exfoliating my skin. Heres a great song I found.... Web Link

Report Objectionable Content
+   1 person likes this
Posted by Pooloop, a resident of Canyon Meadows,
on Aug 3, 2016 at 6:17 am
Pooloop is a registered user.


Thanks a lot for sharing. You have done a brilliant job. Your article is truly relevant to my study at this moment, and I am really happy I discovered your website.
Web Link