﻿ A Visit from Lulu | The Observer | Roz Rogoff | PleasantonWeekly.com |

A Visit from Lulu

Eliana Caimanque and Lulu came over to my house for a visit last Sunday afternoon. Eliana had Lulu's fluffy mane shaved down, so she looked very smooth and sleek. I could see the Dachshund genes in her now. 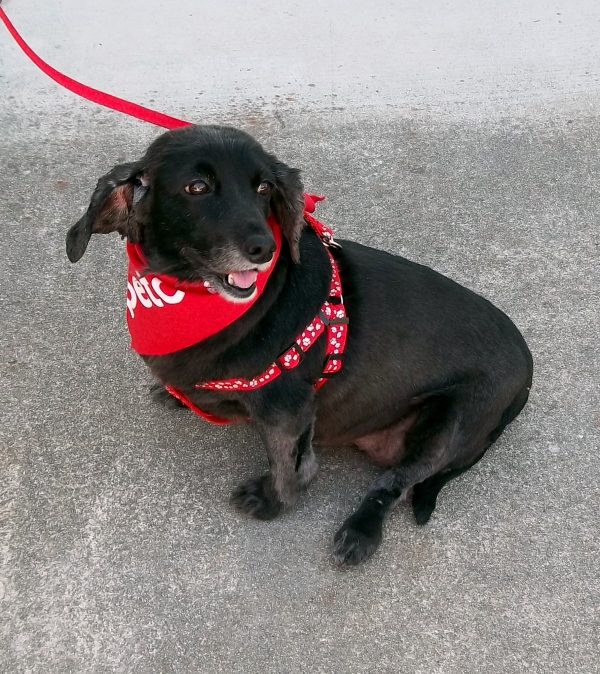 Eliana said she was probably dumped. That's too common in Chile. When people move or want to get rid of their pets, they drop them off in the city and leave them there. There are over a million "unsupervised" dogs in Chile. These may be outdoor pets that are fed by "owners" but not cared for, or dogs like Lulu that were transported to another place and dumped. The situation for cats is even worse.

I asked Eliana if she went to Chile to bring Lulu back. She told me "Lulu's care since she was hit by the car last year as well as her trip to the states was arranged by Cristina Andrea Barra, an extremely compassionate and kind women who dedicates her life to save animals and later on find them permanent homes."

Lulu flew 12 hrs in cargo from Santiago, Chile to Los Angeles. That is where a pet relocation company took over and did all her custom paper work. They also bought her ticket from LA to San Francisco, again in cargo, and took care of her while she was waiting to board the second plane to San Francisco. She said they handled everything after Lulu arrived in the USA until she arrived in San Ramon. The whole trip lasted 18 hrs.

Early Thursday morning Eliana took Lulu to the Sage Clinic to be examined by the neurologist. Eliana emailed me about the exam. "The exam was fine, everything is fine. Blood work has to be done next Tuesday. It was fine 4 weeks ago so the vet does not anticipate any surprise."

Lulu's surgery is scheduled for September 9th. She will be in the hospital for 2 to 3 days and her prognosis is good. "We are still short in money but I got a loan.," Eliana wrote in an email. "I am waiting for a few 'promised' donations to arrive. If push comes to shove I will use my credit card too. Eli"

I suggested holding a "Thank You Party" for Lulu after she recovers and invite all of the donors to the Delmar Dog Park, which is about half-way between Eliana's house and mine.

Lulu had a lot of bad luck for a few years on the streets of Santiago, Chile, but Lulu's luck has changed. She's found a good, permanent home with Eliana, in a lovely place, San Ramon, with a dog park around the corner and all of the friends she's made while raising money for her surgery.


LuluLover, Lulu is on pain medication so her pain is under control, but this is a temporary fix. The surgery is necessary to repair the ruptured disc. Then she will not require the medication any more. Roz


Thank you for always giving a speedy reply! I really appreciate that you (unlike *cough* Tim *cough* Hunt *cough cough*) respond to our concerns!


LuluLover, I have not seen Tim Hunt reply to any comments on his blogs. On the other hand Tom Cushing spends more time answering comments than writing his blogs. I generally answer if someone has a question or a misconception about what I said or meant, but thank you for the complement. Roz


I made a small donation and am hopeful? Others will too...We do the best for our furry friends that are here on this planet to be, well, TAKEN CARE OF by humanity. Unfortunately? It's true: other countries don't place emphasize or have the economic stability to handle domestic animals yet alone treat the wild. Unfortunately? Even some states I the US...I didn't like what I saw in the south and I didn't like what I saw on Kauai in regard to treatment per se of domestic animals (not to mention? Taos, New Mexico and the "native" Americans...shocking)


Ms. Bunny, Thank you so much. Any amount will help Eliana. She has spent all of her savings on Lulu and her other animals. I'm on a lot of mailing lists for animal rescue organizations. There's even one for dogs on Indian Reservations. Now I'm getting mailers for dogs in the Ukraine. We can't save them all. Roz

Report Objectionable Content
+   1 person likes this
Posted by Cholo, a resident of another community,
on Sep 4, 2014 at 6:03 pm


If Lulu doesn't have the cutest tweety tweety face I don't know who does! Everybody that I know loves doggies, cats, birds, lizzards, and bees! VIVA LULU! VIVA! I wonder if Lulu would consider marrying me? signed, anony