Congressman Eric Swalwell's bill to name the Dublin Post Office after Jim Kohnen was signed into law on August 8, 2014 by President Obama. Here's a link to text of the bill, H. R. 1671. The Bill passed the House with 398 votes for and 0 against. I guess voting to name each other's local Post Office is the one thing Democrats and Republicans in Congress can agree on.

Jim Kohnen is a good choice to honor on the Post Office. He was active in water issues in Alameda County, serving on both the Dublin San Ramon Services Board of Directors and the Zone 7 Water Agency. He died unexpectedly a few years ago just when he and his wife were planning to move into a new retirement community in Pleasanton.

The Dublin San Ramon Services District established a $2000 college scholarship in his name. Last year it was awarded to a student from San Ramon. This year the only person to apply did not meet the requirements so the Scholarship was not offered. It will be offered again next year. I hope Jim's name on the Post Office will inspire more students to apply for it.

I went down to the Dublin Post Office this afternoon to buy stamps and ask when Jim Kohnen's name would be added to the P.O. name. I took a snapshot of the front of the building. There's room above "United States Post Office" to add his name. 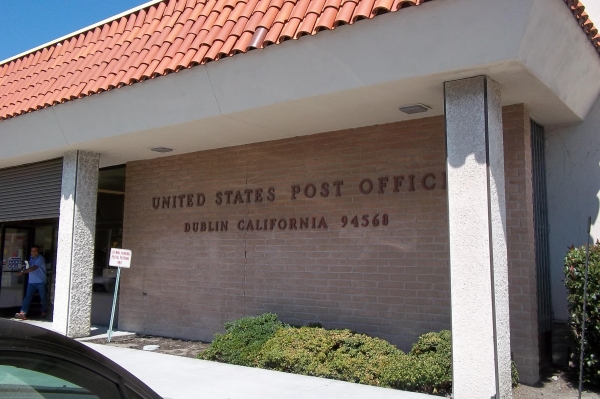 The clerk at the window didn't know where Jim's name would go or when the Post Office's name would be changed. She suggested I call the Postmaster in Pleasanton. She wrote down two phone numbers, which I tried calling when I got home. One didn't answer and the other had been disconnected. So I looked them up on the United States Post Office website and there was an error in the numbers she wrote.

I plan to phone Postmaster Gurjant Khosa tomorrow, but I wanted to post this blog tonight. Swalwell has a Press Release on his website now saying, "There will be a formal naming ceremony with the U.S. Postal Service at a later date." So the date doesn't appear to be set yet.

I'm happy to see Jim Kohnen honored this way and I wondered why out Post Office in San Ramon isn't named after one of our important figures. I thought for a moment and By Athan immediately came to mind. So I emailed Swalwell to name our San Ramon Post Office after Byron Athan.

"The San Ramon Post Office is not named for any important local person. I would like to suggest naming it after Byron Athan. By Athan was an important person in the development of San Ramon. At different times he served on the City Council as a Councilmember and Mayor. He was also the City Attorney, City Manager and all around lovable curmudgeon. Here's a link to the article I wrote after his death."

Roz
That's a wonderful idea. Byron Athan also served on the Dublin San Ramon Services District's Board of Directors from 1966 to 1973, during which a professional fire department was formed (part of DSRSD, now part of the cities of Dublin and San Ramon), a bond election for $6.7 million created funding for the Valley Community Swim Center (now the Dublin Swim Center) and the San Ramon Olympic Pool, among other things.

I knew By was a director of an early agency that later evolved into DSRSD before the incorporation of Dublin and San Ramon as cities. By was a great person. There's a park near me, Athan Downs, named after him. But it is mostly a neighborhood park. The Post Office would memorialize his name for everyone.


I also support this idea. Personally, By was a mentor, friend, and a fellow sailor. His legacy in San Ramon is immeasurable.


I just received the following email from Sam Jordan, Rep. Swalwell's Staff Assistant. The cost of changing the name of the Post Office is much lower than I expected. It is certainly worth pursuing a name change of our P.O. for By Athan.

Thank you for contacting me to share your thoughts regarding the naming of our local post offices. I always appreciate hearing from my constituents, and I am glad to receive your input on this important issue.

As you may know, this month President Obama signed into law H.R. 1671, a bill I introduced which designates the Dublin Post Office as the "James 'Jim' Kohnen Post Office." I share your belief that Dr. Kohnen is well deserving of this recognition. We honor Dr. Kohnen because of his service to our country and our community.

According to the Congressional Research Service, the new plaque provided by the United States Postal Service (USPS) will cost between $250 and $500. USPS will work with the local community and me to organize a dedication ceremony, the costs of which will be from USPS contingency funds or interested local parties. There should be a ceremony within six months, and I will announce the date when it is determined.

Again, I want to thank you for taking the time to share your views. Visit my website at swalwell.house.gov or contact my East Bay offices at 510-370-3322 or 925-460-5100 if we can be of service in any way. To stay connected, join me on Twitter @RepSwalwell, Facebook, and, if you have not done so already, please sign-up on my website to receive my e-newsletter.


Was Jim Kohnen a money loser too?