Uploaded: Aug 2, 2014
Today's blog is about Lulu the dog. I just donated $100 for an operation on a herniated disc that is causing Lulu intense pain. All of the money I saved by not sending it to shrill and demanding political fundraisers, I can now use to help animals and children. Here's a link for more information about Lulu and how to donate. http://www.youcaring.com/pet-expenses/lulu-needs-surgery/211863 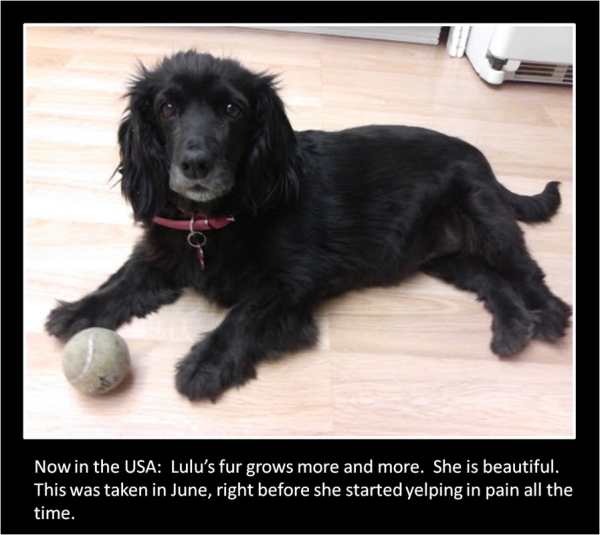 Lulu has had a tough life. She was a street dog in Santiago, Chile for most of her eight years. She was malnourished, had mange (a parasitic skin condition), and a broken pelvis from being hit by a car.

She was rescued by animal sympathizers in Chile and treated for the accident but needed someone to adopt her. She found a home in San Ramon with Eliana Caimanque. Eliana has lived in San Ramon for 12 years. In fact she lives only a few blocks away from me. I've visited her house as a member of Safe Cat to bring cat food for her fosters and a cat for her to foster.

Eliana was born and raised in Chile. She came to the United States from Chile in 1974 with her husband. He came to pursue his PhD in Chemistry at U C Davis. In 1982 Eliana received a degree in Nuclear Medicine from UC San Francisco. She has worked at the San Ramon Regional Medical Center as a Nuclear Medicine Technologist for 14 years.

Lulu was doing well after she was adopted by Eliana. Then Lulu started having really bad pain when moving her neck. Lulu was treated at Bishop Ranch Veterinary Center for a month with muscle relaxants, anti-inflammatory injections and a lot of pain medication, including a fentanyl patch to deliver an opioid like morphine for a few days at a time, but this was dangerously addictive.

Eliana took Lulu for an MRI to locate the source of the pain. The MRI showed c4-c5 herniated disc. Lulu can have surgery to fix this at the Sage Veterinary Center in Dublin, but the cost is $6000. Eliana cannot afford this much. She is asking for donations to help Lulu get the surgery to be pain-free.

The surgery has a very good prognosis and according to the literature, Lulu should recover quickly. Lulu is very healthy otherwise. All of her organs are working perfectly i.e., heart lungs, brain. Kidneys, etc. As Eliana told me, "She has been through a lot. She is a survivor and more important she deserves a chance!!!!"

I know Eliana personally, and I am proud to donate to help Lulu. Thank goodness for people like Eliana in this world.


Yes, Susie N, Eliana is a special person. If 92 people contribute $50, Lulu can get the surgery she needs. Please donate today. Web Link


I would be happy to donate but do not use my credit card online. Please furnish the recipients full name & an address & I will donate.

You can make the check out to Eliana Caimanque. I will deliver your donation to Eliana. It would not be right for me to give out her address.


Bless you, Roz and Eliana!


I received a check for Eliana from a person with a name. I did not write it down, but I delivered the check to Eliana's house last night. She said she would send a thank you note to the person whose name and address are on the check. I wanted to post my thank you here too.

My Editor thought it would be better for me to post the Pleasanton Weekly address instead of my home address; so I have changed it in comment above.


Eliana's address is in the link you provided, Roz....

You are correct. I didn't notice it, but she included her address on the donation site. So anyone who prefers to mail a check directly to Eliana or to Sage Veterinary Center, their addresses are at the bottom of the Lulu Needs Surgery page.


Eliana fosters cats for Safe Cat Foundation. When I fostered cats I had as many as 11 at one time. I wound up keeping the last four. Two that were too shy to be adopted and two that came back from adoption.

I don't know how many foster cats Eliana has now. Eliana does not neglect her fosters, and like many of us who foster animals, she is very attached to them.

The one that died was FIV positive and had leukemia. Eliana agreed to foster a dying cat to give it a good home and care for the time he had left. She just took in another dying cat to care for.

If you care about cats and kittens, go to one of the adoption events listed on the Safe Cat Foundation website. Web Link There are two today in Dublin and one in Livermore.

I received an email from Eliana last night. She needs to raise another $500 for a matching donation. I will donate another $100 to help. Here's her email:

UPDATE UPDATE!! If we get $500 of new donations for LULU, then we have an anonymous donor who is willing to match that amount! Will you please consider making a donation, no matter how small? This is an incredibly generous offer this kind person has made, and we would love to raise the full $500 ASAP. Please donate for Lulu at www.YouCaring.com/LuluNeedsSurgery


I just made a donation on the You Caring website. Bless them both and thanks Roz for letting people know about this.


Thank you, Karen. I'm sure Eliana and Lulu appreciate all of the caring and donations.