Uploaded: Jun 13, 2014
My father, or as I used to call him, Pop, was the best person I ever knew. He was an introvert every bit as much as my mother, Mother, is an extravert. Pop was an intellectual. Mother is artistic, a musician, and highly educated, but not very intellectual.

Pop was creative too, but in a scientific way. He designed and patented 47 electrical connectors over the 40 years he worked for Burndy Corporation. Many of the Burndy patents and products were designed by my Pop.

I don't have many photos of Pop. He was usually the one taking the pictures. I found one on my computer of him and Mother at a resort in New Hampshire. I cropped it to just show Pop. I asked Mother when it was taken and she thought it was early in their marriage before she had children. The lighting isn't very good and it makes Pop look older than he should. 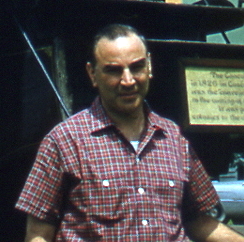 Pop had a difficult childhood, which he rarely spoke about. His parents divorced when he was six years old. Divorce was not very common in 1916. My father was sent to a boarding school while his parents went through the split.

Both of them remarried and had separate families. Growing up I didn't understand why I had three sets of Grandparents or why we weren't allowed to talk about one to the other.

After my Grandmother remarried, she and her husband ran an adult summer camp in the Catskills. This was something like the camp in Arthur Kober's 1937 Broadway play, "Having a Wonderful Time."

My father worked at the camp in the summer, but he was boarded with a farm family in Livingston Manor, NY for the rest of the year. His step-father didn't want him around when he and my Grandmother went back to Brooklyn where they lived.

My father didn't talk about his childhood much. He bought a print of a wooden building that reminded him of the one-room schoolhouse he attended in upstate New York. He was sent to Manhattan to live with his father and step-mother after graduating. Contrary to the stereotype, his step-mother treated him the best of his four parents.

Many years later when his stepfather was old and frail, my father paid most of his medical bills. The old man apologized for how he treated my father when he was a boy. That's what my father was like. He forgave and gave. I won't say he didn't hold grudges, but he was often generous to a fault and very kind in a quiet, understated way.

Pop started working as a draftsman in 1930 for Burndy, a company that manufactured electrical connectors. According to Mother, whom I called this afternoon to get more details and dates, Pop was only 20 years old when he started working for Burndy but had a BA from New York University (NYU) and a Masters in Engineering (ME) from Brooklyn Polytechnic.

Pop worked his way up from this entry-level job to President of the company in 1960. Along the way he designed many of the electrical connectors Burndy made. This was high tech innovation in the 1930s when the country was being wired with electrical and telephone lines across thousands of miles.

Pop retired from Burndy in 1970. He was on the Board of Directors of several other companies, and continued to help out at Burndy answering questions over the phone. Pop was always a big supporter of Research & Development, but the person who took over his job as President cut the R&D budget, which hurt the company over time.

He and Mother bought a new condominium in Palm Beach, Florida in 1978. It was in the design stage and took another two years before they could move in. They spent winters there at first, but he loved being there and planned to live there year round. Sadly he died from a heart attack in 1983, one month short of his 73rd birthday.

Pop got to do most of the things on his bucket list before he reached the bucket. He wanted to fly on the Concorde to France and take a balloon ride over the wine country. Pop designed many of the electrical connectors used in the Concorde, and he got his wish to fly in the high-tech supersonic jet and ride in a balloon, but he didn't have much time left after that.

Pop was a modest man who didn't get the attention and credit he deserved, but he didn't seek it either. He had quite strength and the highest ethics and integrity. It's been over 40 years since his death and I miss him every day.

God bless your dad... He would be proud of what you wrote about him...Sounds like a wonderful man.


Just read this...your Pop was a heck of a man and father. It's funny, but I feel like his was the generation most responsible for the quality of life we are blessed to live. Thanks for sharing. Dan


Thank you American, Cholo, and Dan, Yes Pop was a special person. He was part of what Tom Brokaw called "The Greatest Generation." He and Mother lived through the Great Depression and WWII. Pop didn't fight in the Army. He was 1A because he worked in wartime industry. He designed most of the connectors and electrical systems for fighter planes. His two younger half-brothers on his mother's side, were in the Navy. I don't know if they were in actual combat, but we have photos of them in their sailor suits. They were both very cute. The older brother was 8 years younger than Pop and the younger brother was 15 years younger. I still keep in touch with my cousins from the two brothers. Pop had a half-sister on his father's side. She married an English RAF pilot who was a war hero, but something went wrong with the marriage and she ran away from him and came back to America. He tried to get her to come back to him, but she stayed in New York City and broke off from everyone in the family except her mother. Pop didn't talk about her much, but Mother said he was very hurt by it. Roz Roz