Last year I wrote a blog expressing disappointment with our new Congressman Eric Swalwell. Swalwell won an upset victory over 80 year old Congressman Pete Stark in the redistricted 15th Congressional District. Stark, who held the office for 40 years, was reported to have said he would spend a great deal of money supporting Swalwell's opponent in the 2014 election.

California State Senate Majority Leader, Ellen Corbett, is Swalwell's Democrat opponent for Congress in the June 3rd Primary. I wanted to know more about Ellen Corbett. My growing dissatisfaction with Eric Swalwell's performance in Congress encouraged me to take a closer look at his competition. I emailed Senator Corbett a link to my blog on "All's not swell with Swalwell," and I was put on the mailing list for her press releases.

Senator Corbett called me last week to arrange for an interview. She would be walking precincts in Livermore on Sunday, May 25th and agreed to meet me at Peet's in the Whole Foods shopping center at 4 pm that afternoon. 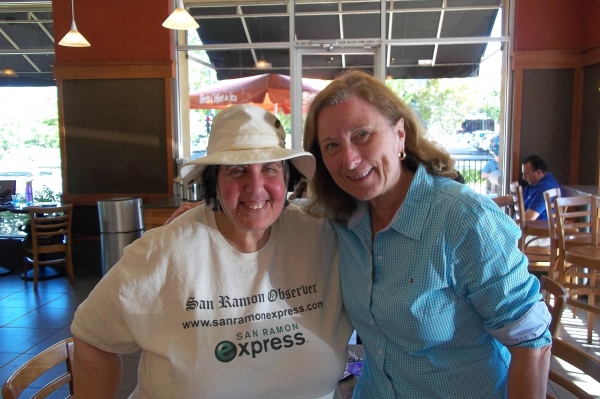 I asked her why she is running for Congress. "I'm interested in continuing my work in public service," she said. She will be termed out of the State Senate this year. I asked why not run for a higher state office. "I want to continue to legislate," she answered, "which is what legislators do." By "legislate," she means authoring or sponsoring Bills to create or modify laws. Both she and Swalwell have law degrees.

But she added, "It's not all about legislating. Sometimes you need to step in and fight." She fought to save the hospital in San Leandro from closing. That would have meant loss of the Emergency Room and Doctors on staff would move their offices out of the city. She put together a committee and kept the hospital open.

She brought up how Congress is talking about cutting unemployment insurance and how hard that is on families. "There's so much more we can do to help our constituents. If they are about to lose their homes, we will intercede to find help. It's an important quality to step in and help personally. People expect us to help them."

Then she said something about Swalwell that surprised me. "He doesn't have any empathy." I hadn't thought of Swalwell as lacking empathy, but I questioned his consideration for constituents in my blog on a Town-Hall Call that never happened.

Corbett has empathy. After a senior residential care facility in Castro Valley was shut down, 19 elderly residents were left without care or services. Corbett told me she met with a husband and wife who were residents of Valley Springs Manor. When it was shut down they were taken to a hospital in an ambulance.

They did not need an ambulance or hospitalization, but that was the only way they could leave and the only place they could go. They were later billed thousands of dollars for these unnecessary medical expenses. Corbett's Bill SB894 would provide for appropriate relocation of residents if a facility is shut down.

"We do more than give speeches," she added, taking a swipe at Representative Swalwell's speech-making around in the 15th Congressional District over the last two years. Swalwell proudly boasts on his Congressional website of traveling 350,000 miles and attending 1100 events and meetings.

So is Stark bankrolling Corbett's campaign to make Swalwell a one-term Congressman? Corbett says the amount of Stark's contributions to her campaign has been greatly exaggerated.

Will she be another ultra-liberal Congressperson like Stark? She has been critical of Swalwell for being the "Least progressive Bay Area Democrat in Congress." I told her that's why he won against Stark.

She said she's aware of the need to cut government waste and spending. "We need to cut down on fraud and abuse, and cut back on the (Federal) deficit. It doesn't make sense to spend money on interest. Spend on programs people really need."


Yes, Arjay, that's actually the job description for a legislator. So she's been doing her job. Roz


Roz: I voted for Swalwell two years ago because I wanted Pete Stark out. I voted against Swalwell this time around because he did not respond to my emails while he was in congress. I have been registered democrat for more then fifty years. I voted for republican candidates this time around. I have grown tired with the democratic convictions, indictments, etc. The Mary Hayashi shoplifting and her no apologies, now her denying it. Leland lee, the list is a long one. The cuddling that goes on in San Francisco, Willie Brown, his candidates of choice. Gavin Newsom. When Newsom runs for governer, after Brown is gone, is when the next republican will be elected governer in California.


Can anyone say with a straight face that the democrats have done a swell job leading the state and country? And if anyone can answer in the affirmative, can you please provide examples? Sincerely, Dan


Is Ms. Rogoff also going to interview the Republican who is running for this Congressional seat?


Westerner & All, I'm meeting Hugh Bussell, the Republican candidate, in Pleasanton this afternoon. I should have my interview with him posted later tonight or early tomorrow morning. Roz


Sorry Roz, but the problem with legislators is that they THINK they have to write laws. If they think a tack is too sharp, they feel they have to write a law to correct it. We do not need laws for every single problem with life. The purpose is representation. A true representative would actually vote against laws written by their same "side", not vote yes because it was their democratic or republican counterpart. They need to vote against laws with massive pork buried in them. They need to vote against useless laws that vacuum away taxpayers hard earned monies. They need to vote against laws even if it's unpopular to do so. Or, they need to write laws that work for the majority of the population. Laws that protect the citizens against wasteful government. Laws that help citizens, not foreign entities or people here illegally. The problem is, legislators like Corbett never read any laws, or think any laws ALL the way through. Legislators like Corbett are self serving only. She admits it with her response, "I want to continue to legislate, which is what legislators do." Great, so go ahead and write some more useless, wasteful laws that serve the small few as opposed to the majority as they should be.


Ben, Corbett's last two acts, SB 894 and SB 895 are intended to protect seniors in inadequate care facilities. SB 895 protects them from abuse and neglect. SB 894 helps to relocate them if the place where they live is closed down. Corbett told me these are for "taking care of people when they are not able to care for themselves." If someone is doing something he/she considers to be of value and they are good at it, they want to keep doing it. Corbett is serving others by doing with what she is good at. Maybe you are not among the others her legislation will help, but that doesn't mean it is useless. Roz


Still waiting for the interview with the Republican candidate.


Who paid for the bills of the elderly that were forced to move from their residence? It's easy to pick up a phone and help?? these elderly citizens by initiating the services of high priced ambulance and medical staff. It?s quite another to find funds so that these unfortunate people did not incur these services as personal bills. If measure A funds did not pay the bills of these elderly people, why are we even voting for measure AA?...so that the taxpayers can continue to pay for mental health care for Santa Rita jail inmates?


Susie, I posted an interview with Hugh Bussell last Wednesday. Here's a link to my interview with Mr. Bussell. Web Link Don't depend on the Editor's tease. That's usually a week behind. Click on "Blogs" in the Masthead and then on my nom de blog, "The Observer." This lists all of my most recent posts. Bussell's interview is the second on the list. I write two blogs a week, and like yesterday's news, they disappear from view after the next one is posted. Roz


Bill, I asked Ellen Corbett why the ambulance wasn't covered by the couple's medical insurance, or even Medicare. She said it was, but that they received the bill first. The same thing happened to me after my accident last year. A year after the accident I received a bill for $1266 for the ambulance. The bill had been circulating around to the wrong places. I made some phone calls and found out where it should have been sent. After a couple of months it was finally paid, but it can be scary when you are elderly and receive a big bill for something you didn't expect to get. Roz