Uploaded: Nov 27, 2013
I have a lot to be thankful for in my life. Living in San Ramon, which was almost an accident, is certainly one of them. This place is like a refuge from the real world. We see gang wars and shootings and babies falling out of apartment windows in other cities, but San Ramon is blissful to the point of wonderment. The worst complaints I hear are that the HOV ramps would reduce property values, or the RV can't be parked in the front yard anymore. How can people even complain about such things with all the suffering in the world?

Many years ago I opened a fortune cookie that said, "You will be lucky for life," and so far that's been true. I was born in a nice place to good parents. They weren't perfect, but they cared about me and didn't abuse me, and tried their best. We had the usual dysfunctional family squabbles, but overall I grew up in nice upper middle class surroundings with a good education and an extended family.

My mother's mother lived with us and was very religious, which is why we kept Kosher. I couldn't eat cheeseburgers like my Catholic friends, and my father had to go out to restaurants for lobster or ham.

My father's father was a Socialist (my dad was a Republican). Grandpa Harry Rogoff was an Editor of the Yiddish Daily Forward in New York City from the 1930's to the late-'50's. He hired future Nobel Laureate, Isaac Beshevis Singer, for his first writing job in America in 1935. About twelve years later my father hired Singer's nephew to paint a portrait of my mother, my brother and myself. My sister was still a year or two from being born. 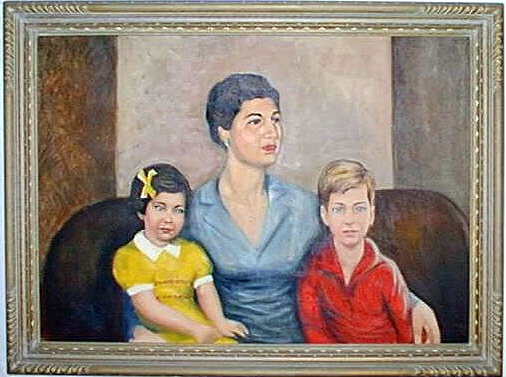 I couldn't sit still for the painting. I squirmed around, tugging at the high collar on my dress, and scratching at the itchy horsehair sofa. My mother tried to control me (she still does, but nobody can control me), and my brother heckled me. My brother sent me the portrait last year. It brings back all those old memories. I think the young artist gave up painting after that experience.

I was about four or five in the painting. My brother is two years older than I am, and my sister is six-and-a-half years younger. If we had been born in Russia where my father's family came from, or Hungary, where my mother's family came from, we probably wouldn't be alive today, or we'd be in Israel if we were lucky enough to survive the holocaust. (See comment added below)*

Everyone forgets the intolerance towards the immigrants in the first part of the 20th Century, eastern European Jews, southern Italians, Chinese, Japanese, Greeks and Slavs. If you go back another 50 years, the Irish were the day laborers and housemaids rejected by proper society. Now it seems the third and forth generations of these immigrant groups have forgotten their roots.

So I'm looking out the window at an overcast sky. The sky is white and stonewashed blue over shadow-gray hills. What a lovely view. What a peaceful place. I wish everyone could be so lucky. I'm very thankful that I am.

* Comment added: I'm not pleased with the way Israel is treating the Palestinians. They should stop the occupation and stop building settlements on Arab land.

Interesting to read story but I still didn't understand who did the painting? Web Link


Wow!! Nice information. Really appreacite your work. This is really a article to be read by everyone. Keep posting these good works.
Thanks,
http://instafollowershacks.com